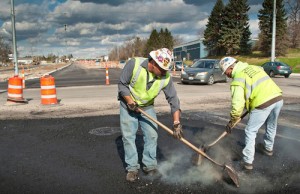 New Bethlehem Borough had requested $27,637.00 for the Pine Circle repaving project based on an estimate prepared by Penn Dot.  It includes milling, superpave binding course, superpave wearing course and wedge curbing for the 820 foot road that is off of Lafayette Street near the cemetery.

In early Summer 2015, the Borough was caught with an unexpected and emergency repair mandated by Penn Dot of two deteriorating storm sewers on heavily traveled Route 66/Wood Street, in the amount of $14,175.16.

In addition, due to the unusually heavy and frequent downpours in Spring and Summer of the last couple of years and the heavy snows of the last two winters, storm water control became an issue in several areas, but especially on Pine Circle which is downhill of the cemetery and some underground springs. The Borough consulted with our engineer and solicitor. Then Borough Staff installed $9,345.46 worth of drains, new inlet boxes and grates, piping, gravel, cold patch and supporting material, not including labor by our street department, to alleviate the storm water issues which were affecting several residents and proceeding downhill to Wood Street/Route 66 in the vicinity of the deteriorating retaining wall on Route 66. Easements from homeowners were also obtained for drainage system improvements.

As a result of these 2 expenditures, totaling $23,520.62, and the need to again resurface Vine Street between Penn and Washington Streets due to heavy bus traffic to and from the primary school, the Borough was not able to resurface Pine Circle as we had planned to do in 2015. The Borough hopes to do the repair work on Pine Circle next Summer when other road repairs are done for economies of scale and while asphalt and petroleum prices hopefully remain lower than they had been in past years.  The need to repair and repave roads is a constant battle given limited funds.

New Bethlehem Borough wishes to express its gratitude to the Clarion County Commissioners Wayne Brosius, Butch Campbell and Greg Faller for this grant of funds that will help us maintain our roads.